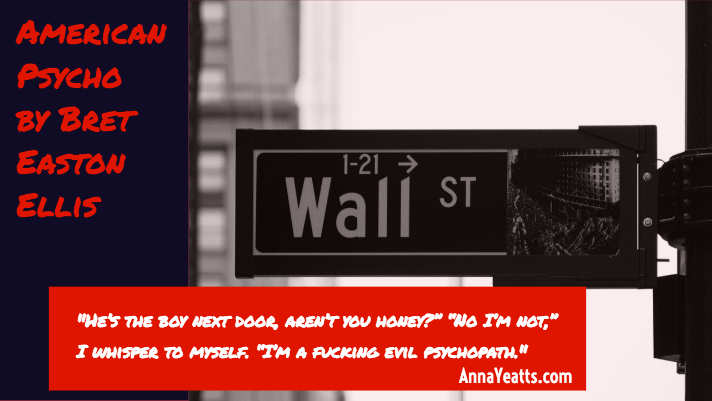 American Psycho by Bret Easton Ellis was published in 1991, both shocking readers and drawing rave reviews from critics. The movie, starring Christian Bale was released in 2000 and has become a cult classic.

So why have I—a longtime fan of dark, twisted literature and movies—repeatedly bounced off American Psycho in both formats?

That was the question I spent the most time asking myself through this reading of American Psycho. And this time, armed with a bit more insight into the technical underpinnings of what makes a successful novel, I might have come up with an answer.

As a writing coach and editor, I often tell authors that if their main character is unlikable, they need to be supremely interesting. And Patrick Bateman, American Psycho’s point of view character, definitely fits the bill of unlikable. He’s a full-blown psychopath who kills on the streets of New York, does drugs with his wealthy friends, and judges women based on their “hardbodies.”

So is he interesting?

But I don’t find him all that interesting. Bateman’s unending recital of who’s wearing what, when, and where is frightfully dull for me. I’ve read an issue or two (okay, many more) of Vogue and I’m not impressed that he can rattle off the label of everything he sees. It becomes monotonous after a few pages, and while it reveals a great deal about the downward spiral of American consumerism, it bores me to tears. I just don’t care about Evelyn’s Manolo Blahniks or Pat’s Ray Bans. The popular culture references feel dated and trite. Tom Cruise—before he ever jumped on Oprah’s couch—is in the elevator and I cringe at Bateman’s little boy eagerness to out-cool the cool kid. The never-ending references to Donald and Ivana Trump are from not just another time but the Ice Age. Don is in the White House with Melania, and Ivana is publishing a tell-all.

So without being interesting and with his likability at zilch, Patrick Bateman is almost impossible for me to stick with as a point of view character. I want for him to get his comeuppance at every page. But that never happens. There’s no tension except within himself, and since I don’t care about him, I don’t care about his internal spiral.

And so, once again, I’ve finished American Psycho, sat back, and wondered why this story continues to be so immensely popular.