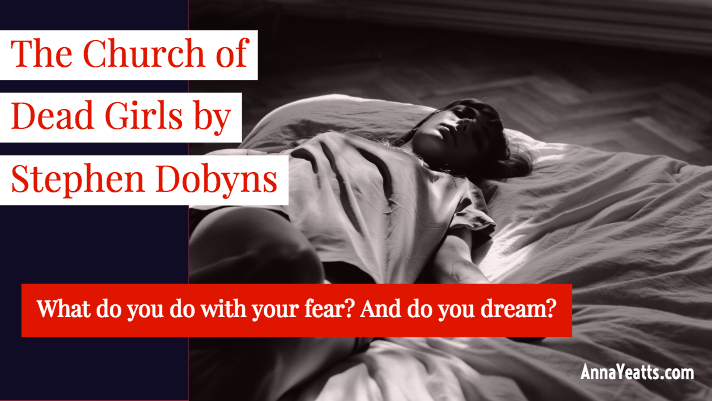 It’s not every day that I have my cake and eat it too, but The Church of Dead Girls by Stephen Dobyns was a delicious combination of my two favorite things—horror and gorgeous imagery.

Dobyns starts strong with a brilliant prologue that describes the Church of Dead Girls. The prose is stunning and so well-crafted that it’s no wonder he’s been nominated for some of literature’s top awards. But the images he conjures—the three Magi, royal robes, mystic symbols, candlelight, magic, and most importantly, the girls’ missing left hands. The left hand has traditionally represented our more sinister nature and desires. By layering this scene within the Church, Dobyns practically dares us not to connect the dots between sin and the wages of sin—death. But he takes it one step further, tying that sinful appendage to blindness, another recurring motif in the novel. “Their whiteness and roundness made me think of eyes, blind eyes, because, of course, how could these white bones ever see?” (Dobyns 5)

And the game of blind blaming begins. One of our first easy (and wrong) targets is Houari Chihani who predicts the town of Aurelius’s downward spiral when he says, “They are asleep… They are afraid for the world and sleep is a way of dealing with their fear. Someday they will wake. Perhaps something frightful will happen. Indeed, there is no better invitation to the frightful than ignorance—that is, sleep.” (Dobyns 35) Indeed this comes full circle in the final chapter, this time in our narrator who reflects, “What do you do with your fear? And do you dream?” (Dobyns 441) Do we wake to our own personal demons and confront them even in our own terror? Or do we, like so many of the townspeople in Aurelius, remain contentedly asleep until it’s too late?

But it’s in blindness that the townspeople will be revealed, as Dobyns shows us in the voyeuristic sexual encounter between our narrator and his blind neighbor, Rosa Daniels. “It was only the accident of her blindness that made her actions observable.”(Dobyns 136) When we can’t see, we make ourselves vulnerable. And the more we are able to see others vulnerabilities, the more our own behavior transgresses. The town as a whole is so gripped by this transgressive behavior, pushing their own limits outward, that it reaches a different kind of passion, closer to exhibitionism. “So many people wanted the attention directed at them as well. It represented one of their secret passions.” (Dobyns 140) As the story progresses “during this period when our blindness was most profound” the town turns on itself with rising violence and paranoia. (Dobyns 397)

And of course, Dobyns brings the book to a close, not by solving the murders, because that’s not what this book was about, but by tying off the imagery of the hand. The killer’s hand is stolen from his casket (using a flashlight… a subtle nod to light in the darkness) and kept as a trophy. But the closing image is that of a clean hand because in the end, the narrator, as well as the people of Aurelius, will inevitably fight the urge to wash their hands of the entire ugly hand. So lest we all forget, “the wrist bone shines. And the nails, how carefully they had been trimmed.” (Dobyns 445) Killers aren’t monsters. They’re men. Men with clean hands and immaculate nails.

And we should never, ever forget that.