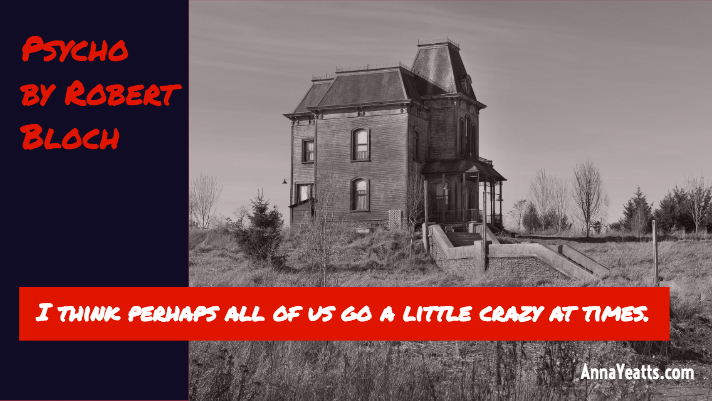 “I think perhaps all of us go a little crazy at times.”

The first time I watched Psycho, I was in college, and I’ll never forget the infamous shower scene. That handful of seconds is scorched into my memory in stark black and white. So perhaps that the filter that I unconsciously brought into Robert Bloch’s novel Psycho. While there are a number of motifs that Bloch uses throughout Psycho, some more skillfully than others, the one that stood out to me the most was his use of light and dark to signify the mood of a scene and represent a character.

From the beginning of the novel—page one, in fact—Bloch describes Norman’s parlor not in stereotypical horror terms but with the coming of the twilight and Norman switching on the lamp. It’s the beginning of Norman’s character journey, the high point before his long spiral downward, and here he’s still relatively satisfied with the stasis in his life.

The first mention of the dark comes right on the heels of Mother’s first appearance as she reprimands Norman for failing to turn on the hotel’s vacancy sign. Throughout the novel, Mother is describing as speaking from the darkness. And it’s a subtle cue that Mother is the force who will constantly tip the balance of Norman’s life from that pleasant glow of his reading lamp into full darkness. And as Mary Crane pulls into the Bates Motel parking lot, Norman takes his raincoat from the hanger, goes out into the darkness, and the story is off and running.

The motif is carried out even in Mary and Lila. Mary, who steals $40,000 from her employer, is seen as the seductress, the evil sister, and she’s repeatedly described as dark-haired and quite often pictured in darkness. Lila, the lighter-haired sister, is the innocent of the two, who is too virtuous to accept stolen money or sleep with a man. Both Sam and Norman momentarily mistake Lila for Mary until she steps into the light.

The use of lighting and the interplay of dark/light becomes an important technique that Bloch uses to tighten the pace and pull the reader through the final pages of Psycho. When Lila finds Mary’s earring at the Bates Motel, she holds the earring in the light. At this moment, Lila and Sam have hope though it quickly begins to fade. In the next scene, Sam sees Norman’s face as a “gray blur in the growing darkness.” (Bloch 147) Sam cuts away to darkness, knowing Lila is in danger, and Bloch leaves the scene with “the thunder was lost in the darkness as Same felt the bottle explode against the roof of his skull. Then voice, thunder, explosion, and Sam himself all disappeared into the night…” (Bloch 151)

But don’t worry. The sheriff blasts light into Sam’s face and wakes him up so they can hustle off to save Lila who is working her way through the increasingly dark and creepy Bates house. Sheriff Chambers tells Sam, “Everything’s dark up there.”

Indeed, it’s very dark up there.

Especially in the basement.